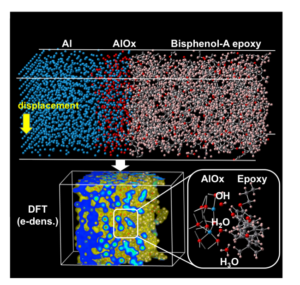 Epoxy resin is commonly used as an adhesive for bonding metals. Recent industrial demands, for example, lightweight multimaterial cars and highly reliable pressure sensors, motivate researchers to improve the reliability and durability of bonded materials. One critical issue regarding adhesive bonding is the weakening of its bonding strength by the water that migrates from a moist environment along the interface. To understand the mechanisms at the electronic structure level, we perform atomic dynamics simulations on various Al and epoxy resin interface systems with water molecules inserted in the contact region. In accordance with experimental conditions, the Al layer is surface-oxidized while the bisphenol-A type epoxy molecule has both OH and ether groups. Shear deformations are simulated using the hybrid quantum-classical method in which about 1500 atoms at the contact region are treated with the density-functional theory using out DC-RGDFT code. For the first time, calculated adhesion strengths compare well with the experimental values. Three types of chemical reactions that affect the adhesion strength occur depending on the terminal functional groups of the Al oxide surface and the water layer formation. Separate calculations confirm small barrier energies for all of the reaction processes. 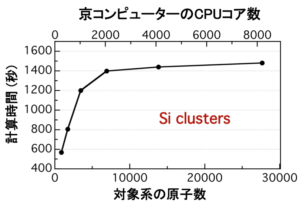 We are researching and developing new electronic state calculation method and its general purpose code which can be applied to large scale target system of thousands of atomic scale. The code of the density functional method based on the Kohn-Sham equation is often expressed and calculated by simply expressing the electron orbit using many plane waves. However, as a result, efficiency is not good when calculating with many nodes of supercomputer. Therefore, in the simulation to investigate the dynamics of atoms, the number of atoms is on the order of 100 in practical use. On the other hand, we developed a real space grid density functional code (RGDFT) that expresses orbital functions as numerical values ​​on lattice points in real space. Since it is a real space expression, boundary condition and total charge number can be freely set. In this method, high latency performance can be obtained when many nodes of supercomputer are used by virtually dividing all lattice points to reduce the number of lattice points each node is in charge of. Recently, in order to be able to deal with the target system of thousands of atomic size, the target system itself is also virtually divided into domains, and a new formulation that integrates the results of real space grid density functional calculations in each domain is also proposed, (DC-RGDFT). According to this method, the force acting on all atoms of the target system can be obtained with a calculation amount proportional to the number of atoms. DC-RGDFT is a performance test using a number of nodes in Supercomputer and shows good results.

Li ion batteries are currently most used mainly for electronic devices, because of its high voltage among various types of storage batteries, capable of repeated use many times and being compact. However, in order to use Li ion batteries as power for automobiles and the like, it is necessary to further improve the performance in various aspects. In the interior of the Li-ion battery, a thin film called a solid electrolyte film (SEI) is formed at the interface between the negative electrode and the electrolyte at the initial charge. Increasing the rate at which Li ions pass through the SEI is important for improving the output performance of the battery. We used the electron state calculation code DC-RGDFT developed independently to calculate 5 times the Li ion group passing through the SEI – electrolyte interface at the vicinity of the Graf anode of Li ion battery It succeeded for the first time in the world to conduct first principles simulation at a scale exceeding (about 2400 atoms). As a result, we discovered the effect of increasing the Li ion permeability by the salt added to the electrolyte.

Lithium ion secondary batteries are widely used as power storage for portable devices such as mobile phones and mobile PCs, as storage batteries that can store energy repeatedly. Recently, further improvement in performance (safety improvement, high capacity, high energy density, high durability, low cost, etc.) for large batteries such as electric cars, plug-in hybrid cars, and stationary type storage batteries, Research has been actively conducted. In actual batteries, it is requested to understand the chemical reaction at the atomic level in the positive electrode material or at the interface between the positive electrode material and the electrolyte, in order to determine the capacity, voltage and durability of the battery by taking out and discharging lithium in the positive electrode material It is done. In this theme, we will work closely with the experimental group with state-of-the-art measurement technology to clarify the chemical reaction inside the battery at the time of charging and discharging by using simulation technology and aim to develop new regulated electrode material. 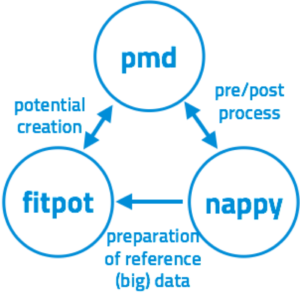 Since the molecular dynamics (MD) simulation is a very powerful tool, it is widely used in materials science. The reliability of the MD simulation strongly depends on the accuracy of the interatomic potentials used in the simulation. Interatomic potentials consist of their function forms and parameters in them. We developed a program package (https://github.com/ryokbys/nap) that can optimize the potential parameters of a variety of materials, enabling us to perform reliable MD simulation of any materials. The program can also construct neural-network (NN) potentials, which can reproduce ab-initio results in errors of a few meV/atom. 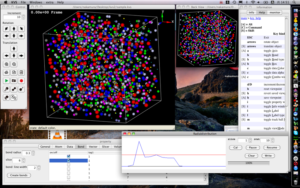 This laboratory independently develops applications that visualize electron density and atomic arrangement ([Public Website]). You can see the results of calculations as images and movies as above and visually aid understanding of simulation results. It is completely written in Java language from scratch and can be run on almost all OS.
There are many software of this kind in the world, there are also very high-function and free software, but we also develop it independently in our laboratory. Doing so has the advantage of being able to draw what you want to display as you want, just by slightly changing the code, because you know the contents of the software completely.